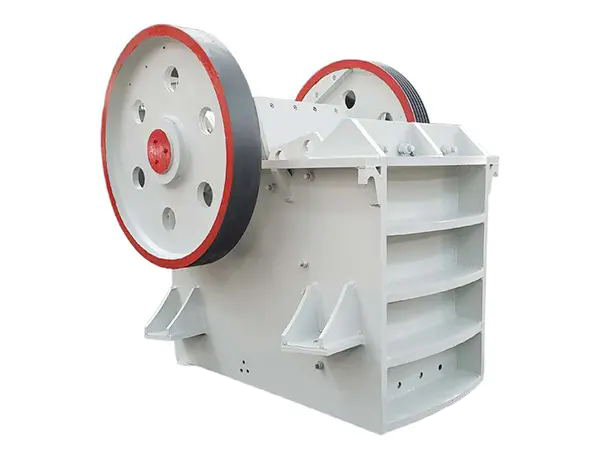 A jaw crusher uses compressive force for breaking of particle. This mechanical pressure is achieved by the two jaws of the crusher of which one is fixed while the other reciprocates.

A jaw or toggle crusher consists of a set of vertical jaws, one jaw is kept stationary and is called a fixed jaw while the other jaw called a swing jaw, moves back and forth relative to it, by a cam or pitman mechanism, acting like a class II lever or a nutcracker. The volume or cavity between the two jaws is called the crushing chamber. The movement of the swing jaw can be quite small, since complete crushing is not performed in one stroke. The inertia required to crush the material is provided by a flywheel that moves a shaft creating an eccentric motion that causes the closing of the gap.

Jaw crushers are heavy duty machines and hence need to be robustly constructed. The outer frame is generally made of cast iron or steel. The jaws themselves are usually constructed from cast steel. They are fitted with replaceable liners which are made of manganese steel, or Ni-hard (a Ni-Cr alloyed cast iron). Jaw crushers are usually constructed in sections to ease the process transportation if they are to be taken underground for carrying out the operations.